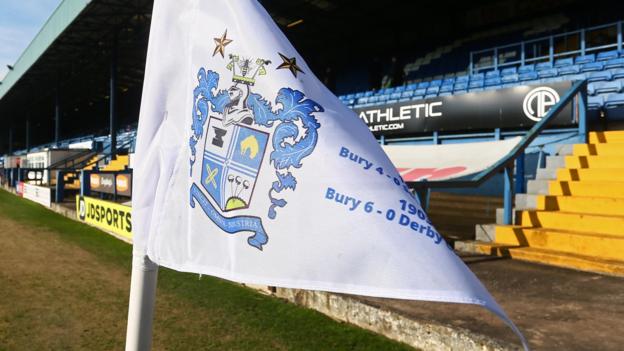 Bury won automatic promotion from League Two last season, but have not yet played a competitive fixture in 2019-20Bury’s away fixture against Rotherham on Tuesday has been suspended by the English Football League – their fifth successive game to be called off.The suspension comes as the League One club works towards a 23 August deadline to avoid expulsion from the EFL.The EFL say they have still not had evidence that Bury can pay creditors and have funding for the season ahead.Owner Steve Dale said earlier this week he has provided the required evidence and is prepared to sell the club.Curzon Ashton offers free entry for Bury season ticket holdersInside a summer to forget for Bolton and BuryShakers staff had issued a statement on Monday which “implored” Dale to accept an offer for Bury, who are yet to play a competitive fixture this season.The game against the Millers is Bury’s fourth League One fixture to be called off, in addition to Tuesday’s Carabao Cup tie against Sheffield Wednesday.Bury have been charged by the EFL for their failure to fulfil that cup fixture, and referred to a disciplinary commission regarding the suspension of their opening four league games.A club statement said: “We are working tirelessly to find a solution to the current issues we are facing with the EFL. We would like to thank supporters for their patience and understanding at this frustrating time for all involved with Bury Football Club.”Bury have already been given a 12-point deduction after entering into a Company Voluntary Arrangement (CVA) – which is classed as an insolvency event by the EFL – as they try to clear some of their debts.A winding-up petition against them was dismissed by the High Court on 31 July, with Dale going on to claim the EFL was “working against” the club. The league’s executive chair Debbie Jevans later said the EFL was “not standing in the way” of the club’s survival.While a withdrawal of membership was served by the EFL and later suspended earlier in the summer, it has now been lifted, with the club now facing expulsion if financial order cannot be restored by 23 August.An EFL statement added: “Bury are due to play Tranmere on 24 August and, because of the close proximity to the notice of withdrawal deadline, a decision on whether to suspend that fixture will take place in the early part of week commencing 19 August.”