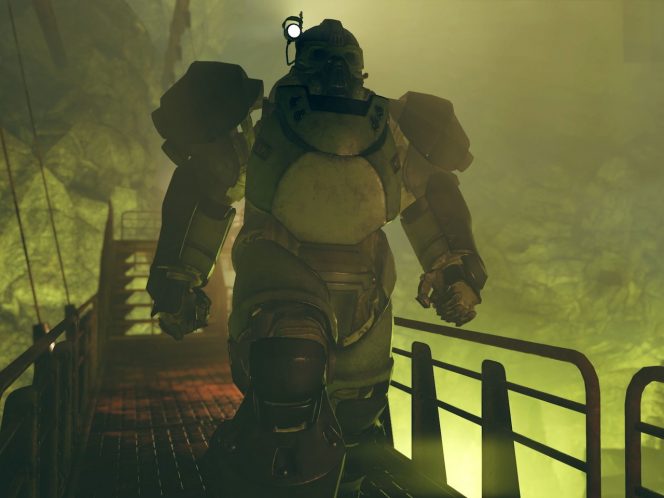 Fallout 76 just got its 11th patch.BethesdaThis week is Comic-Con International in San Diego, which is … fairly light on videogame news, actually. But that doesn’t mean nothing’s happening! Let’s catch up on all of the week’s biggest gaming news. It’ll take just a couple minutes.Fallout 76 Needs a Test Server Something FierceFallout 76 is continuing to have what those of us in the biz call a rough time. On Tuesday, Bethesda released a new patch for the game, patch 11, intended to fix a number of bugs and provide broader content improvements. It’s not going well. According to PC Gamer, the patch has removed some players’ power armor and is outright preventing high-level items from dropping off of enemies, even though the patch was supposed to actually make them drop faster.In response to the latest controversy, Bethesda has canceled a planned livestream, while fans have started asking for something that a lot of games like Fallout 76 already have: a test server. A test server is a specific server of the game set aside for updates to be rolled out early so willing players can serve as testers of the content in a live environment. What I like about this request, and the story in general, is that it shows just how tricky it is to run a massively multiplayer game, and how ignoring the solutions favored by other, bigger games can be ruinous. Especially when folks aren’t super happy with your game anyways.The Nintendo Switch Has a Joy-Con ProblemSo, Nintendo has a lingering hardware problem that no one seems poised to solve. As Kotaku reports, that problem, plaguing a lot of Switch units, is Joy-Con drift, which causes the system to register input from the analog sticks even when they’re, uh, not being moved. Or touched. It’s concern­ing, the way seeing your player-character running around in heedless circles in the middle of a fight is concerning.For players faced with this issue, there’s not a lot that can be done. Nintendo is willing to fix your Joy-Cons, for a price, but with the company not revealing what causes the problem or offering any sort of permanent fix (or software to allow you to modify your stick sensitivity on the fly), there’s no way of knowing that it won’t just happen again. The Switch is a lovely little thing, but it’s not without draw­backs. Maybe packing all that neat stuff into such a portable package had its hardware trade-offs. Just maybe.The Story Trailer For PlayerUnknown’s Battlegrounds Is a Lot to Take InOne question surrounding PlayerUnknown’s Battlegrounds and all the battle royale shooters it helped spawn has always been this: Do they get it? Specifically, do they understand that they’ve turned a bizarre, upsetting premise—a bunch of people stuck on an island fighting to the death—into a fun multiplayer videogame? Do they realize that they’ve re-gamed the Hunger Games?Turns out, they do. At least PUBG does, as the bizarre and upsetting new story trailer for the game (yes, they’re adding a story mode) shows. The trailer features a war-orphan-turned-creepy-rich-dude hosting a private life-and-death tournament as the apparent premise motivating the in-game action. That’s definitely just as upsetting as The Hunger Games or the original Battle Royale. So, yeah, they get it. I hope the rich dude’s name is PlayerUnknown.Recommendation of the Week: Shovel Knight, on PC, PlayStation 4, Xbox One, Nintendo SwitchI’m not huge on 2D nostalgia. A lot of it just misses me. Not Shovel Knight, though. Shovel Knight just works, entirely and fully. In it, players explore a lush, perfectly alive world as a shovel-wielding warrior, one who is avenging his lost love and setting right a world that done gone wrong. Emulating every ulta-hard platformer of days past, Shovel Knight matches the heights of the Super Nintendo era and in some cases goes even further. It’s great. It’s just—it’s great.More Great WIRED StoriesWhen an online teaching job is a window into child abuseThe “manosphere” and the challenge of quantifying hateSikorsky’s S-97 Raider makes your helicopter look lazyPhoto gallery: Vintage muscle cars take flightFear, misinformation, and measles spread in Brooklyn💻 Upgrade your work game with our Gear team’s favorite laptops, keyboards, typing alternatives, and noise-canceling headphones📩 Want more? Sign up for our daily newsletter and never miss our latest and greatest stories
Read More