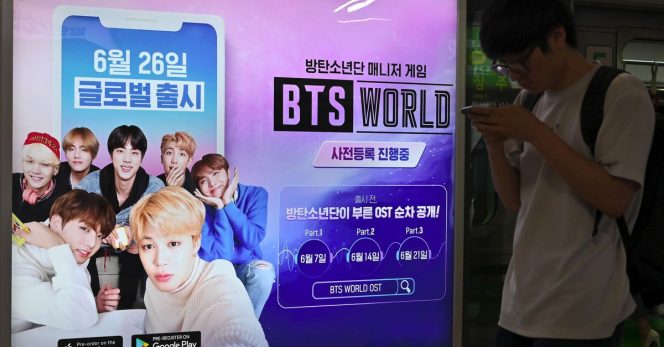 “The information contained in this game has no intended connection to actual individuals, groups, areas, incidents, or ideas,” reads the splash screen for mobile game BTS World, right underneath the face of one of the seven members of K-pop band Bangtan Sonyeondan. It’s not just a cognitive dissonance that the game seems unwilling to address, but the one it’s founded on.
The main story sees the protagonist whisked back from 2019 to 2012, before the band debuted or even met. She (and the English translation does only use she / her; a gendering that the original Korean likely doesn’t need to contend with as a language that rarely uses pronouns) immediately leaps into forming the group that she loves, bringing them together and managing them as they get ready for their debut.
It puts the player in a position to “get to know” the band. As well as generally chatting as the story unfolds, players are also able to communicate with band members via social media, texts, and phone calls. The draw of becoming close to characters in this way is common in mobile games and visual novels, but BTS World is different. Here, the characters are facsimiles of real people. Each conversation is supported by photographs, audio recordings, and videos made by the actual band members.
The draw of the game is forming or, more likely, strengthening parasocial relationships with the members of BTS. The term refers to a feeling of closeness, usually between a fan and a celebrity. The fan observes the celebrity through entertainment, social media, and so on, and feels as if they know them, despite seeing only a distorted fragment which is never the same as knowing someone personally. The celebrity, of course, usually has no idea they even exist.

Parasocial relationships are in no way unique to K-pop, but the genre has utilized them incredibly effectively. Idol groups, more than most bands, allow fans “inside” their lives through video logs, social media, variety TV shows, and more. None have been more successful in cultivating these relationships than the juggernaut that is BTS.
Take, for example, a recent article in The Atlantic by Lenika Cruz, titled “I wasn’t a Fan of BTS. And Then I Was.” She writes:
I tend to explain BTS’s appeal like this: Imagine if the players on your favorite sports team (the members train like athletes, after all) were also your favorite musicians and the stars of your favorite reality-TV show and you also thought of them as family members.
Imagining BTS, or any celebrity, to be as close as family can be harmless fun. The investment increases the buzz of excitement around anything they do, and it leads to a strong camaraderie among the “in” group. But it walks a very thin line. Cruz spoke to former Verge editor Laura Hudson, who had tweeted about getting into the band and being flooded by fans in a way she compares to being a “cult.” “But if it is a cult … it seems like one that’s focused on positivity and acceptance,” says Hudson.
That isn’t always true. A sense of protectiveness can lead some parts of the fan base to be quick to form harassment mobs. Billboard’s K-pop correspondent Tamar Herman, for example, recently demonstrated a death threat she received, allegedly from a BTS fan, and the replies to her tweet are full of justifications as to why she deserved it.

This is, again, not unique to K-pop, but fans who cross the line are prevalent enough within that industry to have their own name: sasaeng. The term usually refers to someone who invades the privacy of an idol, perhaps breaking into their homes, finding and calling their personal phone numbers, or attempting to grab or kiss them when they are in public. Ironically enough, the protagonist of BTS World sometimes feels as though she’s veering into sasaeng territory. She is certainly working from preexisting parasocial relationships with the band, being a fan from the future who is completely thrilled to get a chance to meet her idols.
When rapper Min “Suga” Yunki appears for the first time, for example, a heartbeat sound plays over his form appearing on-screen. And, despite going into the game with an understanding of what parasocial relationships are and why the game would be encouraging them, I would be lying if I didn’t say my own heartbeat picked up at seeing my favorite member. I like Suga. I’ve seen him go from hyper-competent stage performer to grinning young man playing games with his band brothers, and speaking (seemingly) candidly about his struggles with mental illness. I don’t know him. But I feel like I do.
Because of this, the game makes it easy to step into the protagonist’s shoes. I’m excited every time I unlock an additional bit of Suga content, because I get to chat with him more. The same goes for the others. “I just want you to be happy,” I text Park Jimin. I can even outfit them more to my liking, putting Jung “J-Hope” Hoseok in a pink sweater and headband, because I think it looks cuter.
That also means it’s easy to overlook when things are going distinctly beyond a manager-client relationship. Kim “Jin” Seok-jin tells me he’s always thinking about me when eating. “It’s even more delicious that way,” he tells me. Suga buzzes my phone and I have the option to say that “the most handsome of them all” is texting me.

Lines become even more blurred in the “Another Story” section, which is poorly explained, but features the protagonist meeting the band members as if they had never gone into music. Of course, being from 2019, she still knows who they are and inserts herself into their lives. She gets a job at the same dog rescue sanctuary as J-Hope; moves to live in Kim “RM” Namjoon’s neighborhood. Jeon Jungkook, who is a fifteen-year-old high school student, repeatedly turns down her offers to go to dinner, but she persists until he agrees.
As Polygon’s Palmer Haasch correctly identifies, the game is basically different flavors of self-insert fan fiction. Stories where fans get to imagine themselves meeting and befriending famous people they admire have been around for decades, if not longer. But for just as long, the ethics of twisting real people’s lives like this for entertainment has been a subject of debate.

But this professionally developed mobile game is a clear escalation. Almost all real-person fan-fic is nonprofit, created for the writers’ own entertainment. BTS World, on the other hand, was brought to life by those who hold the contracts to BTS’s work, likenesses, and livelihoods. And they didn’t do it out of consideration for fans who might want to enjoy a self-insert story, but to wring money from them.
Players can pay for gashapon-style rewards, drawing cards that offer stats to progress the game, unlocking more interactions with the band. They also feature a picture, or in the case of rare five-star cards, a GIF, of a member which can be downloaded once unlocked. Collecting them all is encouraged, which would likely cost thousands of dollars thanks to the low drop rates of the most uncommon cards. And even outside of the game, the increased feeling of closeness caused by “chatting” with the band is likely to drive sales of albums, merchandise, and so on.
BTS’s members have been characters for a while, on social media, TV shows, and even in their music. Without knowing them personally, no one can tell how much of that is performance; what aspects of themselves are exaggerated or left unexplored. But it is clear that literally turning them into game characters further blurs this line between person and persona, in a way that is intended to bring fans even closer to their idols — all in the hopes they’ll shell out more cash.